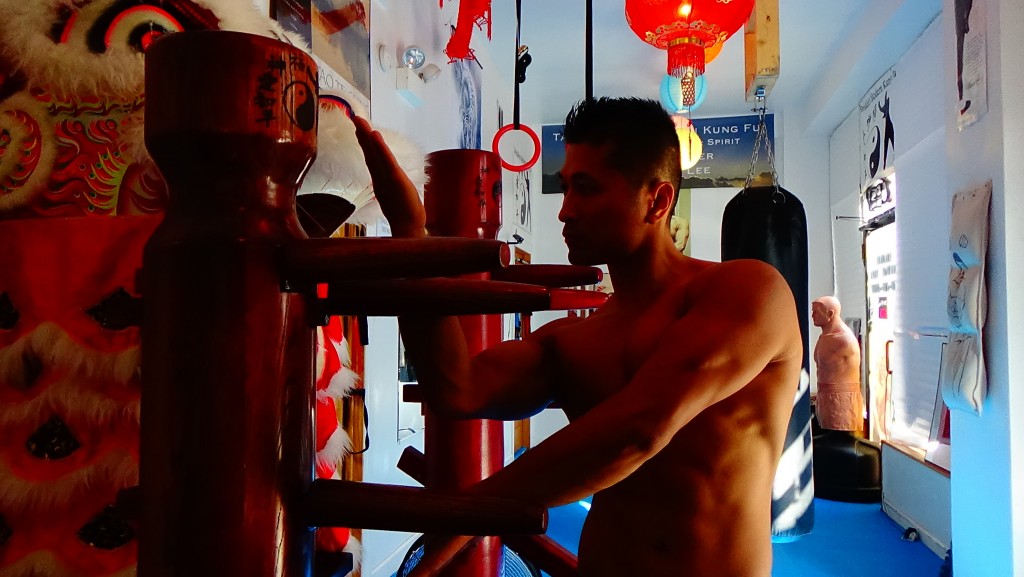 The Meaning of Kung Fu

In Chinese, kung fu (meaning “work” or “achievement” and “man”, or fu, a particle or suffix that can mean “intensity”) can also be used in contexts completely unrelated to martial arts, and refers to any individual accomplishment or skill cultivated through long effort and hard work.  It is only in the late twentieth century, that this term was used in relation to martial arts by the Chinese community.  Wushu is a more precise term for general martial activities.

Kung fu is a Chinese term referring to any study, learning, or practice that requires patience, energy, and time to complete, often used in the West to refer to Chinese martial arts, also known as Wushu. It is only in the late twentieth century, that this term was used in relation to Chinese Martial Arts by the Chinese community.  The Oxford English Dictionary defines the term “Kung-fu” as “a primarily unarmed Chinese martial art resembling karate.”  This illustrates how this term has been misused in English. The origin of this misuse can be attributed to the misunderstanding or mistranslation of the term through movie subtitles or dubbing.

In its original meaning, kung fu can refer to any skill achieved through hard work and practice, not necessarily martial.  Originally, to practice kung fu did not just mean to practice Chinese martial arts. Instead, it referred to the process of one’s training – the strengthening of the body and the mind, the learning and the perfection of one’s skills – rather than to what was being trained. It refers to excellence achieved through long practice in any endeavor.

In the colloquial, one can say that a person’s kung fu is good in cooking, or that someone has kung fu in calligraphy; saying that a person possesses kung fu in an area implies skill in that area, which they have worked hard to develop. Someone with “bad kung fu” simply has not put enough time and effort into training, or seems to lack the motivation to do so. Kung fu is also a name used for the elaborate Fujian tea ceremony (Kung-fu cha).

However, the phrase (kung fu wu shu) does exist in Chinese and could be (loosely) translated as ‘the skills of the martial arts’.

Traditionally, in Chinese martial arts, sifu was used as a familial term and sign of respect as in the general usage.  The term takes on a more intimate context when a student becomes a formal student or disciple of the teacher. The acceptance as a student is a very formal event, usually requiring a discipleship ceremony called bai shi.  After the ceremony, the relationship is defined as a more direct parent–child context and usage takes on this term rather than a generic sign of respect for skill and knowledge.

The term Shifu is a combination of the characters “teacher” and “father.” The traditional Chinese martial arts school, or kwoon is an extended family headed by the Shifu. The Shifu’s teacher is the ” honorable master” or Shigong. Similarly the Shifu’s wife is the Shimu “teacher mother” and the grandmaster’s wife is known as: shi lao; or shi po. Male and female students who began training before you and are thus senior, are Shixing “teacher older brothers” and shi gu “teacher’s sisters”. Women in traditional society did not have the same status as males (in spite what modern movies tell you). Students junior to you are your Shidi and Shimei. The pattern extends to uncles, aunts, cousins, great uncles, and so forth.

A teacher might be referred to as shi zu “founding teacher”. e.g. Bruce Lee is the Shi zu “founder” of Jeet Kune Do.

A closer relationship is formed between the Shifu and the Todai “disciple”. After a formal Tea Ceremony, where everyone dresses up in their Sunday’s best, the Todai kneels while serving his Shifu tea and becomes virtually an adopted son. The Todai assists the Shifu in minor school duties such as housekeeping and tuition collection.

Chinese martial arts lineages are based on one of three systems: Men (Buddhist/religious ); Jia  (military/family) or Pai (faction or branch school of one of the ‘men’ systems). Shigong (Pinyin) which literally translates ‘honorable master’. This dates back to the family systems (jia) of martial arts where the Shifu is the master and ‘father figure’ of the students. The ‘honorable master’ shigong’ is an earlier generation in the lineage is also connected to the Men Buddhist systems and military based Jia systems. However this term, although it parallels the traditional family, is distinct from the familial maternal grandfather.

Dharma transmission (chin.: chuan fa) is a complicated affair. Basically “to transmit the dharma” means to transmit an understanding of the truth. In this regard, instead of acknowledging only one disciple, Chan masters began to transmit the dharma to several disciples. This often created situations where the lineage fanned out so that it became unwieldy and it was not clear who was senior.

Because of this, many sub-sects arose within Chan. As a result some lineages in Chan, as with lay Shaolin lineages adopted a quota system limited the number of students any one master may passed (graduated) the lineage to. In more recent history the custom arose of giving a written attestation, called a “dharma scroll” (chin.: fa juan), to ‘graduated’ disciples.

In many of these cases monks were actually not given these but made their own copies. Typically these scrolls began with a story of Buddha then continued with the founder of the sub sect followed by a list of every master. Each name was assigned a generation number based on a piece of text. The scroll was used as proof of orthodoxy. In effect what was being transmitted was the authority to teach. Transmission of the dharma as a seal of office was the practice at most Chinese monasteries. However it should be pointed out that dharma was often transmitted from monk to monk without any reference to abbot-ship of a monastery but simply as a private transmission.

What further complicated records was secrecy. This kind of secrecy surrounded not only martial arts but also Buddhist and Taoist medication practices (kung fu). “Do not pass to anyone outside the temple the religion and the teachings.” Historical records also show that there was official (government) disapproval of Shaolin monks teaching martial arts to outsiders. This in effect created a situation where the names of monk masters were kept secret or simply not divulged. However, at least since the Ming Dynasty historical records suggest that Shaolin martial arts were passed on mainly through monks and their lay followers most of whom kept very poor if any records.

In many cases because of the all too common tumultuous times these were lost or destroyed. Most were left to relied on oral transmission, master to disciple. Even in cases, where the equivalent of ‘dharma names’ (chin.: fa ming) was used to keep track of generational seniority and ancestry, these have been forgotten or were not rigorously used (a common problem with many Buddhist lineages as well). Be that as it may, most if not all, Shaolin martial art methods practiced today, including that which is practice today at Shaolin, survived because of lay Buddhist practitioners and lay lineages.

In old school northern Chinese martial arts lineages such a Shaolin or Baqua, seniority was decided by a generational system. Here teachers (shifu) could have a number of students each qualified to teach (to graduate) and pass on the next generation. The most junior member of one generation was senior to the most senior member of the next. In other words ‘grandmaster’ is not a title as is claim by some in the west, but is rather is a relational term. A person addressing or speaking about the teacher of his teacher, would use the word ‘grandmaster’ (‘shi ye’ or ‘shi zu’), however if that same person was one’s own teacher, the title ‘teacher’ (shifu) would be used instead of ‘shigong’.

The relational terms in Shaolin martial arts are as follows:

In some lineage (non-Chinese) based systems there is only one grandmaster who is the head or father figure of the entire style and acts as the overseer and example to all the style’s adherents. It is the grandmaster’s duty to see that the style continues on intact to the next generation of students and masters as well as look deeply into the style itself for anything that can be strengthened in any way. As the grandmaster it is him only who has the authority to change the style’s format for future generations legitimately.

In some cases, the grandmaster from one generation to the next is a prized disciple of the last grandmaster who has trained and mastered all the style’s aspects including fighting techniques, theory and philosophy, and is publicly named the next grandmaster upon the current one’s retirement. In various systems there are different traditions regarding this passing on of the title. More commonly a number ‘graduates’ from the same generation are included.